Maya UI to swap textures on a mesh

I've been working on a tool to speed up texturing workflow for crowds in Maya.

It's early stages, but I intend to use this tool to set the Home team and Away team for a stadium crowd setup.

It can be used for many teams in lots of different leagues in Europe. That's hundreds of teams and I'm not finished populating the texture files and thumbnails yet, but here is a video to show its funcionality so far.

Show all clips in an Agent's Clip Catalog

Here is a way of displaying all the clips in an Agent's clip catalog.

Let's say you have an agent with a number of clips already defined.
It's very useful to playblast the agent, as it plays the animation in each clip.
It's possible to manually place agents and change the clip of each agent, but that can be laborious and we want to do things procedurally, do we not?

Here is a quick method for re-timing clips for use in a Crowd system.

If you have a clip, loaded from a FBX file directly into the Agent Clip node, that is too slow or too fast you can re-time the clip.

In my example, I have loaded a number of clips, categorised by type - I love to be organised that way and it speeds things up if you have many clips.
I have a little transition clip where the agent moves hands from the knee to the lap. The original clip os very slow, taking 65 frames to complete the actions. I need it to be done much quicker than that.
I don't want to open the clip and re-animate it, export the clip and re-import it. I would much rather re-time the clip as I am working in the Agent Definition workflow.
Here is the original clip alongside the re-timed clip for comparison
To re-time a clip:
This new clip can be used just like any other clip in the Crowd setup. You can use this method to reverse clips and even ramp clip speed if you need to.
at July 08, 2020 No comments:

I decided to re-make the previous stadium shot using Golaem, Maya and Arnold.
I have used Golaem a few years ago and I wanted to refresh my skills.

Using the same assets from Character Creator (re-posed), I imported them and rigged them in Golaem. I setup one male and one female character but with a few clothing variations.
Each character is playing a random selection of Golaem's built-in clips.
All this was setup and rendered in a day. Try doing that in Houdini!

I have found a solutuion to using skinned clothing layers in Houdini's crowd system. 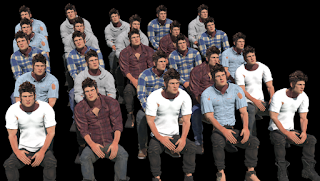 This method involes saving clothing geometry in T-pose, or whatever rest pose your rig uses.
In my case, I am generating characters using Reallusion's Character Creator, which alows a character, with clothing to be posed in any position. The rig I am using comes from MocapOnline which has a T-pose rest position.
It is possible to use any pose, if the rig is key-framed before frame 1 and animated to rest position at the start of the clip. There is a step-by-step demonstration of this process by Kevin Ma, which clearly explains what to do.

What I want is to have an agent with multiple shirts, trousers and shoes. A few of each will give a reasonable variety. I plan to vary the shader on each piece of clothing too, but that will come later.

I need to generate a few versions of my character and save out the geometry. Character Creator can output obj and FBX formats.

Here are the variations of my character that I generated:

I will be using shirts from all five but just three trousers and shoes.
I have named these geometry meshes as MALE_01_VAR_01.obj, MALE_01_VAR_02.obj, etc.
We need to skin all this geometry to the Rig. As mentioned, I am using the Crowd Animation pack from Mocap Online. That comes with a rig and skinned geometry.
Here is what the geometry and rig look like once they have been imported into Houdini. 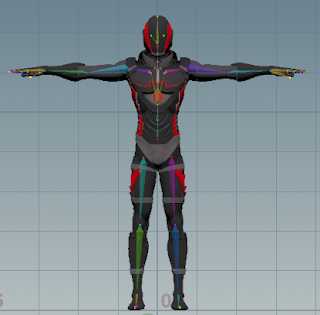 The third picture shows the geometry and materials that comes with the MocapOnline rig. We will not need these so they can be deleted. We will replace the geometry with our own.
Rename the FBX import node as RIG
Now we will create an un-clothed agent:
Inside RIG, Create a geometry node, name it MALE_01
Jump inside MALE_01 and create a file node.
The file node should point to one of the obj files exported from Character Creator, let's say MALE_01_VAR_01.obj
That file will have clothes but we are going to remove those clothes.
Geometry exported from Character Creator has primitive groups, which is very useful in this next step.
We want to blast away all the primitive groups belonging to the clothes.
Follow that blast node with a null.

This is now ready for skinning to the rig.
Jump up one level so you can see the rig and the geometry object.
Select the geometry object and on the Rigging shelf, press the Capture Geometry button.
The viewport will prompt you to select the root node of the rig. Do that and press enter in the viewport.
After a short calculation, the goemetry will be skinned to the rig. Sort of. 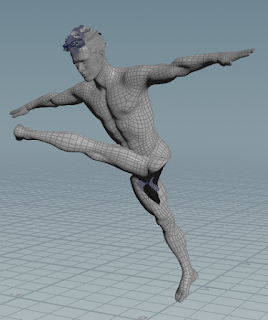 If you see this kind of result, it's because the bind is calculated at frame 0, not frame 1. SideFX in their infinite wisdom have made that the default. It's easily fixed, though.
Jump into the geometry node again. You will see some new nodes. 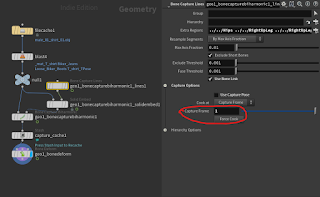 The node called Bone Capture Lines has an option to specify which frame to use for binding the geometry to the rig. Set that parameter to 1. Then, on the Capture Cache node, press the Stash button. You should now have a properly skinned character.
Jump up to the /obj level and make a new Geomotry node.
Jump inside and drop down an Agent node.
The agent should have the Input set to Character Rig and then specify the RIG node with the rig and geometry inside.

You can import clips in the usual way, and then cache out the agent using the AgentDefinitionCache node.
The details of this process are covered in another post, so I will not spend too much time discussing these steps.
Now for the clothing layers.
Jump inside the RIG node again. We are going to create skinned geometry in the same way that we did for the unclothed body.
Greate a new Geometry node. Rename it MALE_01_SHIRT_01
Inside that node, drop down a File node and import MALE_01_VAR_01.obj
We want to delete everything except the shirt geometry, so use a Blast node and in the Group drop-down, choose the primitive group that refers to the shirt and then check the box 'Delete Non Selected'.

Now you just have the shirt. This can be skinned to the rig, as before.
Jump up one level, select the geometry node with the shirt geometry and press the Capture Geometry button on the Rigging shelf.
Again, you will probably have to set the capture frame to 1 and then hit the Stash button, just like we did before.
So you should now have a shirt skinned to the same rig as the body geometry.
We can make an Agent Layer from this. 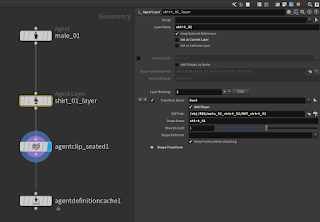 A couple of critical points to note here:
Do not use a Source Layer. We want the clothing on it's own, without any body geometry. We are adding the clothing to the default Agent layer, which is the body, so we do not want another copy of the body.
Bind the clothes shape to the Root node of the rig. Because the clothes shape is skinned, it will follow the Root node the same way as the body does.
Repeat this for all the clothes layers you need.
Save the Agent definition using the AgentDefinitionCache node.
Bringing the Agent into a new scene and using the shirt layers requires an Agent SOP with the Input set to Agent Definition Cache. The agent will have a default layer and all the new clothing layers ('shirt_01', 'shirt_02', etc).
To have some agents using the default and some using the shirt layers, I have used 2 Crowdsource nodes. 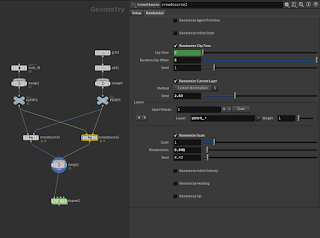 One node is used for the default layer and the other to chose a random shirt.
You can use the wildcard ('*') to allow Houdini to randomly select a shirt with equal distribution, or you can have a more guided selection, allowing you to choose the probability of which shirt is chosen

The clothes should follow the body with any animation clip that the agent is playing.
My skinning skills are limited, which is why there are some areas of inter-penetration, but with more careful skinning these can be fixed. 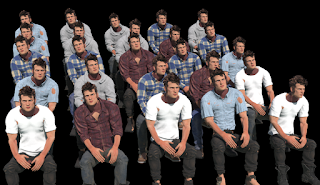 Making a Stadium Crowd from scratch with Houdini and Character Creator

Creating Stadium Crowds is a fairly routine task for a Crowd FX Artist, but there is scope for some interesting workflow and automation.
I will explain how I have made a basic Stadium Crowd with SideFX Houdini and Reallusion Character Creator. I am using Houdini v18 and Character Creator v3.2. I am also using the Crowd Animation pack from Mocap Online. I find the animation clips are good quality and have plenty of variations. You can also source clips for free from Mixamo.

When planning a Stadium Crowd, there are a few things to consider:

To create an effect like a stadium crowd, the best strategy is to break the job down into smaller parts while still being concious of the whole pipeline.

First up are the assets. We will need the folowing:
Characters

There are several sources for gathering character assets. Mixamo has a few that would be suitable for stadium crowd work (Brian, Adam, Liam, Shea, Malcolm, Kate, Suzie, Elizabeth). These are free, rigged and come with animation clips.
If you need higher quality, you may find free models online. Have a look on cgTrader, TurboSquid and Sketchfab.
Another way to get high quality models is to generate them yourself using software, such as Reallusion's Character Creator.
This software can generate character meshes in Obj and Fbx format, posed as you like.
Clothing can be varied using the built-in library but that library is quite limited. However the library can be extended using clothing geometry from other sources.
Here is an example of a character with clothes from the built-in library 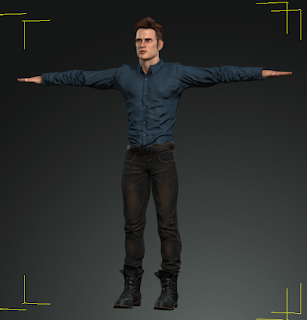 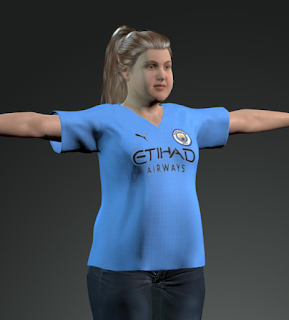 An example of a mesh (hooded sweater) imported into Character Creator 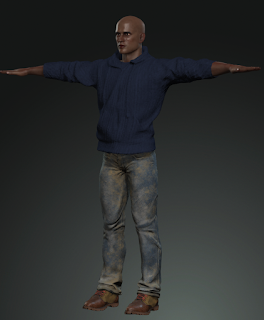 It is also possible to import textures for skin and faces. Here's Pep: 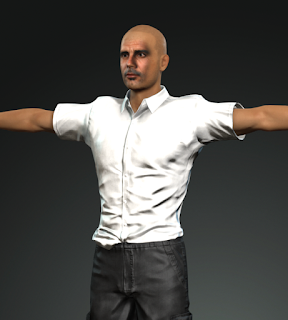 These meshes can be exported from Character Creator as FBX, which will produce a single mesh with primitive groups which will become useful when breaking the mesh in Houdini. The export will also save out texture files for each of the seperate mesh groups. Textures include Diffuse, Normal map, specular, roughness and maybe one or two others, depending on the materials on the clothing. Some of these textures will be too much detail for a Crowd simulation, but they are there if required for close-up shots. I would consider Crowd FX unsuitable for close-up shots, so I only use the Diffuse and Normal maps in most cases.
at June 10, 2020 1 comment: